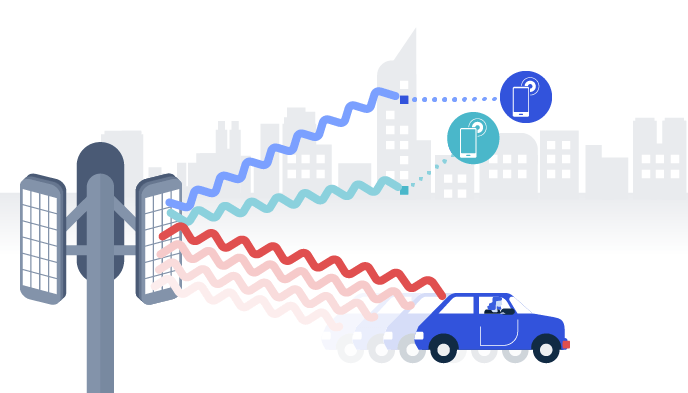 Is 5G Safe? Why do some people think it isn’t?

There’s currently huge controversy in the news today regarding safety of 5G: Is it safe, or not? 5G vendors & scientists say the technology is perfectly safe, and some members of the public allege that 5G isn’t safe. Here we examine the topics factually.

There is nothing magic or new about the frequencies used or proposed for 5G. They have ALL been used already, actually for decades! 5G frequencies are split into two sections: FR1 (less than 6GHz) and FR2 (high frequency microwave, or “millimeter wave”).

FR2 frequencies (millimeter wave, or mmWave) have already been used – very widely – for Point-to-Point microwave links. All of the FR2 bands (24Ghz, 26GHz, 28GHz, 38-40GHz, and even the proposed 60GHz) have been used for point-to-point terrestrial microwave links. Those are the parabolic dishes you see everywhere on rooftops or towers. These signals are highly directional “pencil beams” with typically 1 degree or less beam width. The number of these links globally is in the 100,000+ range: they are beaming signals around cities all over the world, usually connecting internet services, beaming signals up to 3G/4G towers or for links between corporate office networks. As a result of the creation of 5G technology, these frequencies are now being re-used (“re-farmed”) for use by 5G base stations to connect end users to the internet, using Point-to-multipoint beamforming technologies. Important note: the use of 5G is no more or less “scary” than the previous use for point to point links. Note that point-to-point microwave has existed since 1930: 90 years ago, and health risks (and lack of risk to public) are very well understood.

Also, the lower frequencies (lower end of FR1) can be transmitted at higher power levels than the higher frequencies. Conversely, high frequencies (mmWave, FR2) are limited to lower power due to limitation of today’s commercial technology.

Some of the “5G Conspiracists” allege that 5G will cause damage/health risk to humans. There is simply no measured case or evidence of this happening. If there were, there would be scientists & health advisors demanding change. Let’s examine in more detail:

5G sites using FR1 transmit at exactly the SAME power levels as 4G sites. So you’re not irradiated any more than a 4G site was. 40W a typical figure for a macro (big) site, and 1W for a Small Cell (small site).
Note carefully: 5G FR1 sites use EXACTLY the same power levels as 4G sites, which is similar to 3G sites, and before that, 2G sites …
5G uses “sector antennas” (typically 3 on a macro site) just like 4G does.
Therefore any related health risk is therefore the same for 5G as it’s predecessors.

5G sites using FR2 transmit at MUCH lower power levels: less than 1 Watt typically. These high frequency signals have poor penetration of buildings and obstacles, so are generally “line of sight” only. As noted above, ALL of the FR2 frequencies have been used before, for terrestrial microwave links, and at similar power levels (less than 1 Watt).
The use of beamforming steers the signal to the required locations; this reduces the overall amount of transmitted power emitted into the air, and hence total radiation. Put simply, if you aren’t using your device, the base station doesn’t point power at you.

How to 5G power levels compare to other Radio/RF transmitters?

You will notice that the HIGHEST powered transmitters are Television transmitters (Megawatt), Radars & Radio stations (10’s of Kilowatts). A macro 5G base station at 40W comes nowhere close. Note that these various transmitters are used on different frequencies, there’s no “one” frequency that is safer (or less safe) than another. It’s only the RF exposure (power) level that matters – specifically, the power incident on your own human body.

Why is there no mass hysteria from “Truthers” about TV, Radar and Radio transmitters? Because if they were THAT bad for our health, they would have been banned and switched off decades ago. Evern the largest (macro) 5G transmit powers are tiny by comparison.

The RF power emitted from the transmitter antenna spreads with distance. This means that a person some distance away from the tower only receives a weak signal. As you DOUBLE the distance, you receive one QUARTER the power level. This is called the “inverse square law”. What it means in practice is that a person 100’s of metres away from a base station is radiated with only microwatts of power, which is insignificant, especially compared to this next point:

The highest radiation of Radio signals you will get is from …. wait for it …
Your cellphone is on your person – and when used in the worst case, held directly against your head. The cellphone transmits at up to 1 Watt power – in all directions – which means the signals go into your head as well as the air around you. This topic remains the same since the first cordless phones in the 1980’s, analogue cellphones and GSM phones in the 1990’s. Using the phone means the signal is close to your head – and the most sensitive item, your brain. The HIGHEST amount of radiation you will receive from any wireless system is from your OWN HANDSET when you hold it to your head to make a voice call. Therefore, if you are really worried about cellphone safety – STOP using your OWN phone. The radiation your body receives from it is 1000’s of times stronger than that you receive from the mast.

If you’re worried about 2G, 3G, 4G, 5G masts: stop now. The FIRST thing you must do is switch off your OWN phone, and never hold it against your head to talk. And if it’s in your pocket/jacket/handbag do remember, it’s still transmitting to the mast, updating it’s location to the network, and often up/downloading data to your apps continually. It’s still transmitting, even in “standby”.
If you’re not prepared to turn off your OWN PHONE, then stop worrying about masts at all. The signal from masts signal is over 1000 times weaker than your OWN PHONE when it reaches your body.

Also, these higher frequency 5G signals cannot penetrate solid objects easily, such as cars, trees, and walls, because of the nature of these higher frequency electromagnetic waves. 5G cells can be deliberately designed to be as inconspicuous as possible, which finds applications in places like restaurants and shopping malls.

Challenges for 5G Safety – for EVERYONE !

It is the responsibility of the 4G/5G cellular industry, national regulators, safety agencies and all academics to be truthful about the safety of all radio transmitters. There must be no cover-ups, lying, or partial truths. Medical research into possible risks of RF exposure must continue and be well funded. The industry needs to deliver reliable cellullar service without putting populations at risk. “Profit” cannot come at cost of public safety.

Conversely – “truthers” making up pseudo-science & invented “facts”, with blogs written by uneducated persons have so far resulted in:

Now think clearly and rationally: EVERYONE has a legal & moral responsibility to behave within the law and not to threaten the health of others.
Clearly those posting non-factual “truther” content on Internet websites & social medahave a responsibility to bear. If you are one of those authors, think carefully. Your action could well cause harm or death of others.

I simply don’t believe you!

That’s the frequent response of someone when confronted with information that conflicts with their previously held opinion or prejudices. In the case of 5G, we have we have plenty of information sources. On the “5G is safe” side we have:

Have a careful think about what sources of information you take in forming your world view. Just two hundred years ago, our ancestors burned and drowned innocent people for “witchcraft”. Why are we any better informed than our ancestors? Answer: SCIENCE and EDUCATION. We use logic, rather than irrational and uninformed fear.

There is a huge media frenzy and “truther sites” full of pseudo-science about 5G & safety. We suggest we make our decisions based on science and facts. Here’s our summary:

Also, these higher frequency 5G signals cannot penetrate solid objects easily, such as cars, trees, and walls, because of the nature of these higher frequency electromagnetic waves. 5G cells can be deliberately designed to be as inconspicuous as possible, which finds applications in places like restaurants and shopping malls.

Transmissions in mmWave bands suffer from significantly higher path loss and susceptibility to blockage. In addition, mmWave RF complexity makes meeting the cost and power constraints of mobile devices extremely challenging, which is why mmWave for mobile communications has historically been not feasible—until now. 5G NR mmWave is changing this.

While the initial focus for mobile operators is to quickly expand network capacities by starting deployments of 5G NR mmWave in existing dense urban markets, there are even more opportunities for mmWave beyond traditional macro networks. One area of interest is to bring mmWave indoors to address the exploding demand of fiber-like wireless broadband access in crowded venues, such as convention centers, concert halls, and stadiums. These venues have traditionally been challenged with limited network capacity, thereby constrained with the quality of service (e.g., slow speeds and unreliable connectivity) they can deliver. With mmWave’s significantly wider bandwidth and high spatial multiplexing gains, mobile operators and service providers could rapidly make multi-Gigabit, low-latency connectivity available to a large number of users.

Another exciting opportunity for mmWave is for private indoor enterprises, including offices, shop floors, meeting rooms and more. Imagine having virtually unlimited capacity and fiber-like wireless connectivity for your devices at work, no matter if it’s a smartphone, tablet, laptop, or mobile extended reality (XR). For these indoor deployment scenarios, we have also performed extensive study to show that significant coverage (i.e., >90%) and multi-Gbps median speeds can be achieved simply by co-siting mmWave small cells with existing LTE or Wi-Fi access points.